Todays post is about the strategy of pairs trading stocks. This strategy is incredibly useful as you can ‘double-dip’ on a good investment thesis. I will go over the methodology/definition, finding the correlating stocks, the five steps to executing a pairs trade, and the pros and cons of taking out a pairs trade.

Definition and methodology of pairs trading

Pairs trading is when you take two positions in two different assets/stocks with the idea of making money off the correlation between the two assets as their prices begin to diverge.

One of the best things about pairs trading as a strategy is that for the large part it is market neutral. This means that the overall market shouldn’t impact this trade that much. As such pairs trading is a way that “smart” money such as hedge funds can position a long term trade without worrying about outside variables. 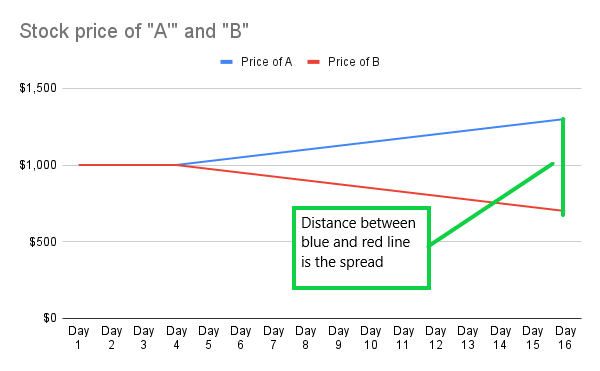 Had you only bought the blue line in the above image then your total value on day 16 would be $1,300 and you would have only made a net profit of $300. Likewise if you shorted the red line then the net profit when you bought back your shares would be $300 as well.

By engaging in a pairs trade you doubled your profit from $300 to $600 by playing the spread, good job!

Further, in order to properly engage in a pairs trade the sector the companies are involved in must be in a period of economic peak or contraction. This is because in a period of sector growth the two companies will be growing largely independent of the others actions. When a sector is growing the consumer base is so large that oftentimes there is no bottleneck for the two companies to compete over…yet.

Once this happens then the pairs trade is broken and the companies “diverge” from being correlated to each other. This divergence is when the position should be closed and profits taken.

The Five Steps to a Successful Pairs Trade

Every pairs trade needs to be carefully thought out and executed. As such here are the Five steps to a pairs trade, from open to close.

For these five steps I will use the companies Papa John’s Pizza (PZZA) and Domino’s Pizza (DPZ). These are two major pizza restaurant chains located primarily in the United States.

This step is similar to looking at companies competitors when doing relative analysis. I recommend starting with a company that you are already familiar with their business model, revenue generation source/sources, and consumer basis.

For this step you need to do some homework. In a sector of growth you can expect both PZZA and DPZ to go up in a similar fashion. This is because in sectors with heavy growth competing companies will have room to increase revenue without engaging in competitive practices.

To do this, find out if the sector is undergoing one of the four economic cycles.

During times of sector expansion both PZZA and DPZ will have ample amounts of consumers of their pizzas. As such since even though the companies are correlated they will uptrend during this period of sector growth.

If your pairs trade at this point then buy and hold both stocks and wait. Eventually they will begin to diverge as one of the stocks becomes more competitive then the other. This typically happens during the cycle of peak.

3.) Take Positions in the Short Company and Long Company.

For this I look at what company has the most EBITDA going into the period of economic peak/contraction in the sector. If for example Papa Johns (PZZA) has more discretionary capital to spend on attracting/retaining consumers then I would place a long position on them. Subsequently I would place a short position on DPZ since I expect them to begin to lose market cap to PZZA.

The pairs trading strategy requires near constant upkeep. This is because you can’t predict the future. There is a chance in this scenario that PZZA is actually the company too short and DPZ is the long, or maybe they are truly not even a pairs trade.

Whatever the case it’s pretty easy to see if the two companies are in fact eligible for a pairs trade within a short time period of the overall trade. Within 10% of the time length of the potential trade you should notice if both companies are diverging as expected.

On day 3 of the above image you would be able to tell that both DPZ and PZZA were in fact not a pairs trade and you could have closed or lessened the position. This is not rocket science and sometimes you are not going to be correct no matter how much time you throw at a situation.

The best case scenario is to just constantly keep checking up on and editing your position sizes. By doing this you will lessen your risk and be able to see if your underlying thesis of PZZA and DPZ (or whatever stocks) being a pairs trade.

No pairs trade lasts forever. They are hard to find and even harder to predict. Once you have one however you will know. The trick now is to properly close your position once the companies begin to diverge.

As we can see around day 16 is when PZZA and DPZ in our scenario diverge from being a pairs trade. At this point the position should be closed to maximize gain and minimize risk. Letting the position run longer than this divergence point will expose your trade to needless risk.

If properly done then you can expect to make close to double your potential gain while introducing only a little extra risk into your portfolio.

Pros and Cons of Pairs Trading

Like everything there are pros and cons, the strategy of pairs trading is no different.

1.) This type of trade is called a statistical arbitrage because you are taking advantage of a growing price difference between two assets. As such you only depend on two types of stocks/assets and have little exposure to the larger market as a whole. Sure I supposed that if the U.S market tanked nobody would be buying pizzas but generally speaking PZZA and DPZ don’t care about the larger issues of insurance rates or inflation.

2.) If done properly the pairs trade can ‘double dip’ on a good investment thesis. Think x company is going up, then go see if it can be pairs traded with y company. If you are right then you can double dip on the same amount of research.

3.) It’s a relatively safe trade once executed properly. Just keep up with position sizing and make sure the pairs trade holds true.

1.) True pairs trades are rare nowadays. This is because most companies have more than one revenue stream along with having their hand in many different sectors.

2.) Finding a true competitor to hedge against a long company is hard. The market as a whole has become more niche and as a result oftentimes companies don’t have a direct competitor.

3.) Holding a short position will cost you in the long run. If you don’t keep up with the sizing it can quickly add up and eat into profits.

That’s a simple explanation of Pairs Trading, how to do it, and its value to your portfolio. Once you get these core concepts down you can break into statistical valuation and technical valuation to find more and more pair trading opportunities.

It’s a great tool to have within your investing toolbox and allows you to ‘double dip’ on a minimal increase in risk.

Until next time, I wish you the best of luck in your investments!