Today we are going to be looking at a major development in the electric vehicle sector. Yesterday (06/23/2021) Xpeng Motors was given the green light to list its stock on the Hong Kong stock exchange. Today $XPEV announced that it was issuing a sale of 83 million shares globally, an action which will generate substantial capital for the new company. How does $TSLA respond to $XPEV and how can you profit from this move?

According to a recent 288 page report published by MarketsandMarkets, the global Electric Vehicle market is expected to grow from 4,093 thousand units in 2021 to 34,756 units by 2030. That is a growth of around 850% over the next nine years.(Citation: https://www.marketsandmarkets.com/Market-Reports/electric-vehicle-market-209371461.html)

Tesla Inc. is the largest EV manufacturer in the United States. $TSLA is split into two categories; automotive and energy generation and storage. Both of these segments have massive economic potential but require near inhuman amounts of capital in the form of R&D and marketing.

First, the automotive section. $TSLA’s vehicle portfolio is dominated by three types of vehicles. The Model 3, a four-door midsize sedan designed for mass production and marketed en-mass to the EV market. Next is the Model Y, a compact sport utility vehicle that can seat up to seven adults. The third EV product is the Model S/ Model X, which are marketed as the best in class EV with the highest range. The vehicles are manufactured in both the U.S and China.

Second, Energy Generation and Storage. This is the bread and butter of $TSLA with most of the R&D spending going into generating the next generation of battery storage and solar generation. $TSLA offers a home battery system called Powerwall. Further, $TSLA is looking to break into the energy generation and utility business by offering subscription solar energy sales/solar roof products. Battery and solar production is only done in the United States.

$TSLA is traded both on the U.S market and on the Chinese market. This along with a portion of $TSLA’s vehicle production being placed in China presents a risk to the company that Musk and others are attempting to carefully navigate. It is no secret that $TSLA is drastically overvalued but again the market fails to price in the concept of word of mouth marketing.

Musk is both a meme and hero to a lot of the younger generations. This has been further exacerbated by Elon Musk’s recent superstar persona thanks in part to his stance on the adoption of Crypto Currency along with certain public appearances. This has driven both his name and $TSLA’s brand recognition through the roof. As a result retailers over the past two years have gravitated towards his stock causing massive price fluctuation.

$TSLA is investing in the future of battery production. Truly the economic potential of $TSLA is huge and professional investors such as Cathie Wood have taken notice. Musk’s vision of $TSLA has always been a pipe-dream but with every year that dream comes closer to becoming a reality. We just are not there yet.

XPeng Inc. advertises itself as not just any EV manufacturer but rather it is another smart electric vehicle manufacturer. Their two main products are the G3 SUV and four door sports sedan, the P7. 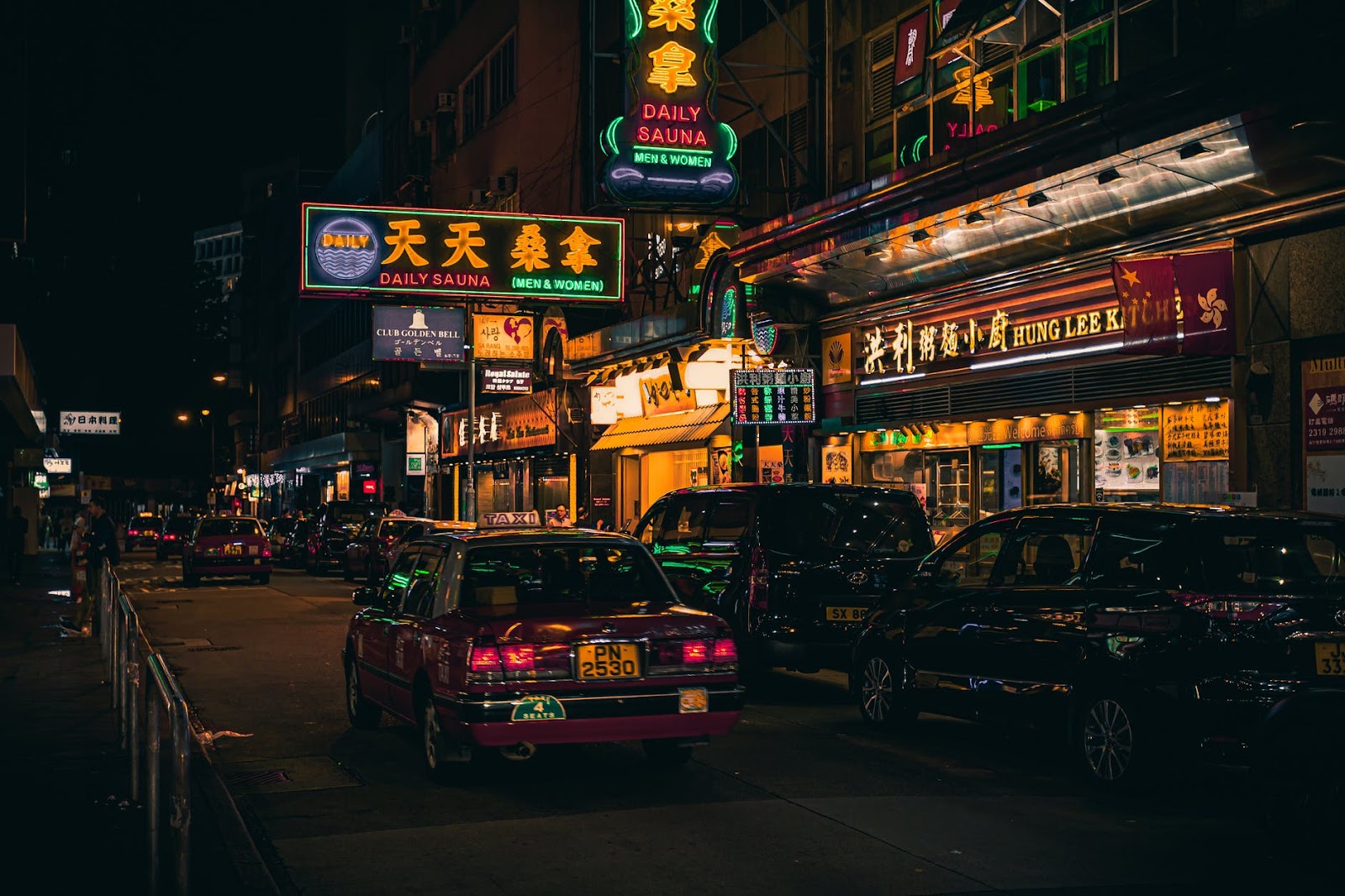 Soon these streets will be flooded with EV’s.

Both of these vehicles rival $TSLA’s products in range and features but differ in cost. After substantial price reductions $TSLA’s most cost effective product in China is the Model 3 which retails for $39,000 while the P7 for Xpeng costs only a meager $32,000. According to research done by CNBC, price is the major factor that consumers in China focus on when buying their vehicles. (Citation: https://www.cnbc.com/2021/03/03/why-some-chinese-buy-local-electric-car-brands-nio-xpeng-and-not-tesla.html)

Further, Xpeng advertises that 40% of its staff is currently being directed towards R&D projects. These R&D projects are centered around getting the Xpeng vehicle line fully autonomous to compete with $TSLA’s technology. As a testament to this capital investment, in March of 2021 Xpeng set the record for the longest autonomous drive. Xpeng differs from other Chinese EV companies by not focusing on fully autonomous driving and only perfecting human assisted navigation, an approach that mimics $TSLA’s recent efforts (Citation:https://www.businesswire.com/news/home/20210331005581/en/XPeng-Sets-Records-for-Longest-Autonomous-Drive)

What we see developing is the changing of the EV market in China. $TSLA is steadily losing market cap to upcoming competitors in the EV market. $XPEV stands to be a major competitor however due to their decision to directly focus on taking on $TSLA vehicles.

As a result $TSLA can either decide to cut back their costs to continue to compete with $XPEV or decide to begin to market their proprietary battery technology to the Chinese market. Right now the ball is in $TSLA’s court and we are currently waiting to see what Musk and his management team will decide to do about competitors such as $XPEV.

We know that $TSLA has something cooking in regards to battery production technology, but not much credible news has come to light recently. If $TSLA announces that they have successfully switched from Cobalt to Nickle for example then $TSLA can begin to diversify out of China and into either Europe or South America. If $TSLA drags its feet then we will begin to see the market in China slide and potentially begin to affect the EV market in the states as well.

As such our trade needs to account for these two descensions.

Setting up the investment: Both invest and hedge on $TSLA and $XPEV.

First, $XPEV is an A.D.R (American Depository Receipt). This means that any investment into the U.S ticker means your portfolio will have an exposure to the Chinese market. Second, $TSLA is currently overvalued by traditional metrics so any position we take will have to account for inherent risk.

For this trade I recommend selling a put on either $TSLA in the range of the low $530’s. Currently for a capital reservation of $53,000 you can make $1860 or a 3.5% return over the next 85 days. This will net you a bit on premium as well as get you in on any upwards gain in $TSLA (via the contract becoming less to buy back) should the stock trend upwards. The reason for buying a put is twofold; First, $TSLA is going to need to announce something soon in order to compete with $XPEV in the Chinese market. Second, if $TSLA continues to trend upwards you can re-buy the contract at a lower price. 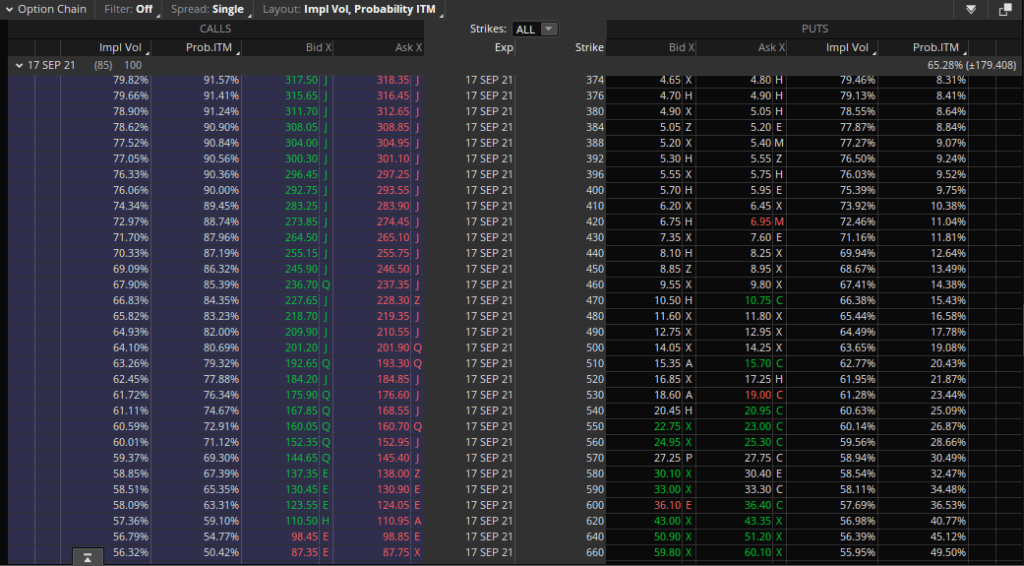 If the capital investment is too high the I recommend buying shares in Cathie Woods famous $ARKK ETF which will give you a 9.78% exposure to $TSLA along with a whole slew of other products. Buying $ARKK will limit your downside while also getting you into this EV play.

Next, I recommend that we buy Iron Condor’s in $XPEV. The reason behind this is that $XPEV will react to whatever $TSLA decides to do. We have established that $TSLA either needs to reinvent its approach in China or begin to back away from dominating the market. This will drastically affect the underlying price of $XPEV’s A.D.R stock. Because of this $XPEV’s price will either swing down or up so the Iron Condor trade is a great choice for $XPEV. Iron Condor ending in January of next year for $XPEV.

Right now you can buy an Iron Condor on XPEV that expires in January for $400 (Strike window is $40 and $45). The return on this trade is $102 which is around a 25% return. If $XPEV decides it’s going to make the first move, such as pre-emptively lowering the price on their P7 then you will profit faster from this trade.

This trade does expose your portfolio to some amount of risk in the form of investing in China, investing in an emerging sector (EV), and playing an Iron Condor (contracts can expire worthless). We have hedged against China and the Emerging Sector risk by investing in $TSLA. The risk inherently present in the Iron Condor is mitigated by the underlying thesis that $XPEV will move in relation to $TSLA’s action in the China market. That being said, there is a chance that the Iron Condor expires worthless, but the chance of $XPEV trending between $35 and $50 for the next 211 days is slim.

So that’s that. A long winded post on how you can position your portfolio to be in the U.S EV market through either selling puts on $TSLA at a strategic level or playing it safe and buying shares in the $ARKK ETF and holding. Further, the thesis calls for rapid movement on $XPEV in response to $TSLA’s direction in the Chinese EV market.

If $TSLA decides to double down on selling in China then your portfolio will make profit from your U.S position (either sold puts on $TSLA or bought shares of $ARKK) while $XPEV will react and trigger your contracts to become profitable. Should $TSLA decide to move away from China then $XPEV will go up and you will gain that 25% return on your contracts while also gaining profit on $TSLA’s hype buildup on the announcement.

You should hold this position until January 2022 then reevaluate both companies’ decision to the EV market in China.

Further, you can check out some of our other content below.

Until next time, best of luck in your trading!